Nikki Haley is resigning as U.S. ambassador to the United Nations. And the timing is raising eyebrows.

President Trump and Haley held a quickly arranged media availability Tuesday morning in the White House, shortly after Axios’s Jonathan Swan broke the news of her impending exit. Haley said her resignation was simply about needing a break after six years as South Carolina governor and two at the United Nations, and Trump said Haley even previewed a desire to leave as long as six months ago.

The two were obviously eager to downplay the idea that this was hasty. But if it wasn’t, that might make the timing even odder.

If this was long planned, it was apparently one of the best-kept secrets in a very leaky White House. The news reportedly blindsided those in the foreign policy establishment, the White House and even members of Haley’s staff. 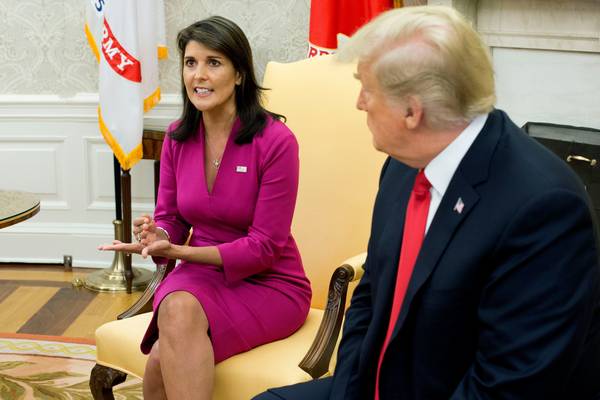 Haley’s exit is due at the end of the year, which means she’ll be around for as many as 12 more weeks. But she and the White House chose to announce this four weeks before the 2018 election? The White House is effectively announcing the exit of its most popular Cabinet official — the extremely rare one who has strong approval among Republicans and Democrats — just before voters vote. Apart from perhaps Defense Secretary James Mattis, nobody is seen as being such a steadying influence in an unwieldy administration as Haley is.

The breaking news also comes as Trump and Republicans appeared to be on the front foot when it comes to the aftermath of Brett M. Kavanaugh’s Supreme Court confirmation. Republican enthusiasm is up, and a poll late Monday even suggested that independents viewed Democrats’ actions surrounding Kavanaugh more dimly than Republicans’. The GOP had a clear interest in keeping things focused on Kavanaugh, and yet the White House inserted this the morning after Kavanaugh’s ceremonial swearing-in.

Haley’s is also the first major administration exit since that anonymous New York Times op-ed in which a still-unknown “senior administration official” talked about how officials were working to check Trump’s impulses and even undermine him in certain ways. Haley’s name quickly rose to the top when it came to potential authors of the op-ed — given her well-established independence within the administration — but she issued perhaps the strongest rebuke of the author in an op-ed of her own.

The timing is also odd given a headline that popped up just a day before the announcement. A Washington watchdog group, Citizens for Responsibility and Ethics in Washington (CREW), called for an investigation into her use of private travel on the government’s dime. We don’t know whether there is anything untoward going on, but resigning so shortly after such a headline drops wouldn’t seem to be optimal — especially given that similar ethics allegations took down Cabinet officials such as Tom Price and Scott Pruitt.

Update: Haley’s resignation letter is dated Oct. 3, which would put it before the above allegations became public. The White House hasn’t always been totally accurate with its dates, it bears noting, but that date does coincide with when Haley met with Trump in-person. It was also a day after Trump mocked Christine Blasey Ford at a rally, though there’s no indication this had anything to do with Haley’s departure.

Rep. Mark Sanford (R-S.C.) raised that story and other ideas with MSNBC shortly after Haley’s resignation. Sanford, a fellow former South Carolina governor who has been allies with Haley in the past but is now an administration critic, said of the story: “Something doesn’t smell right. Something’s weird.”

Sanford’s speculation could just be Sanford being Sanford — he’s one of the most unusual politicians in the country — but it’s not unreasonable to wonder what’s going on. So much is unknown. About the only reason for the timing we can rule out at this point is that this is about 2020. Haley in her availability with Trump said she won’t run against him and will instead campaign for him. She also offered glowing praise for Ivanka Trump and Jared Kushner, calling the latter a “hidden genius.”

But if there was a simple, good reason for this departure being announced now, we don’t know it yet.