A model has spoken out to say that banning size zero models from working is a form of body shaming.

But, while the news was generally considered a step in the right direction, model Jaime King thinks otherwise and is now actively speaking out against the proposals.

Instead, she believes that banning ultra-thin women from working in the fashion industry is just the same as body shaming larger sized women experience.

“When people on Instagram say, “Go eat a hamburger”, I’m like, “Wow, they’re body shaming me for the way I look”.”

King isn’t speaking out just as a ‘skinny’ woman though, as she admits to being judged by potential employers after being diagnosed with endometriosis and gaining 3 stone – a factor she puts down to her hormones “going crazy.”

“And it was like, “Oh, (producers) want to offer you this role, but they want to know why you got fat”. I realised being shamed for gaining weight or being too thin felt the same.”

In 2015, France’s National Assembly passed a law that requires models working in the country to provide a medical certificate stating their overall health and body mass index is appropriate.

Modeling agencies or fashion houses that do not follow the law face imprisonment and a hefty fine of 75,000 euros.

Contrarily, King isn’t against all regulations within the modelling industry as she admits that she completely agrees with parental chaperones for models under 18.

“I wasn’t ready for a lot of the situations I was put in” she adds.

“Why is it that in the fashion industry it’s OK to shoot people naked under the age of 18, and in any other place it would be child pornography? The things I was asked to do, I look back on it, and it’s crazy.” 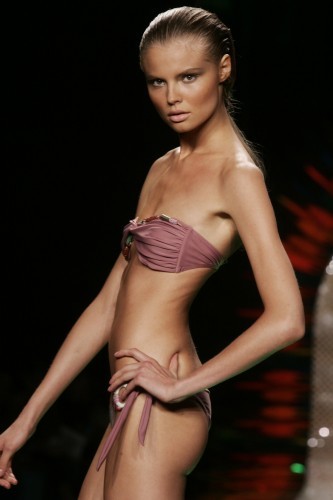