There has been terrible explosion at the Abule Ado area of Festac Town in Amuwo Odofin LGA of Lagos State.

An observer said that a tipper offloading sand caught fire, which spread to a nearby pipeline, triggering the blast.

According to reports many houses have been destroyed by the explosion. Buidlings are currently on fire in Ado Soba, Abule-Ado, and Amuwo-Odofin.

No death has been reported but there are people with serious injuries as a result of the explosion. Nigerians were seen rescuing high school studuents and people trapped within nearby buildings.

I saw this on Facebook. What’s the name of this school? I pray this children are fine #festac #abuleado pic.twitter.com/OdD3aCvE1w

– The sound which was heard in ijegun, surulere, abule egba, Ikotun, Ikeja, Isolo, Okota, Egbeda etc. It is suspected to be Another bunkery case.
pic.twitter.com/gPCo0p6f8Q

After the explosion today this how my hood Festac looks like rn… Most of us lost all.. But Thanks to God for life we are all safe. Abule ado pic.twitter.com/WDGQiJGFrS

[Graphic video] first images of casualties being pulled out of collapsed buildings from the Abule Ado, Festac Lagos explosions. pic.twitter.com/pZT2tqHr2H

What you people heard in festac and other parts of Lagos is obviously just the ripple effect.
I fear for the people that love here and the students in that boarding school! It was a pipeline explosion at abule Ado!! God help your children this Sunday morning 💔😭😭 pic.twitter.com/p16st834PJ 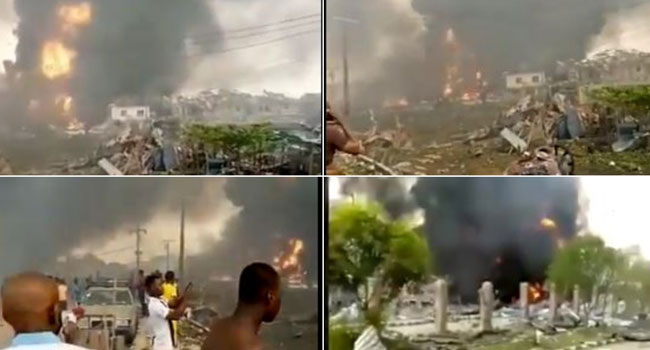